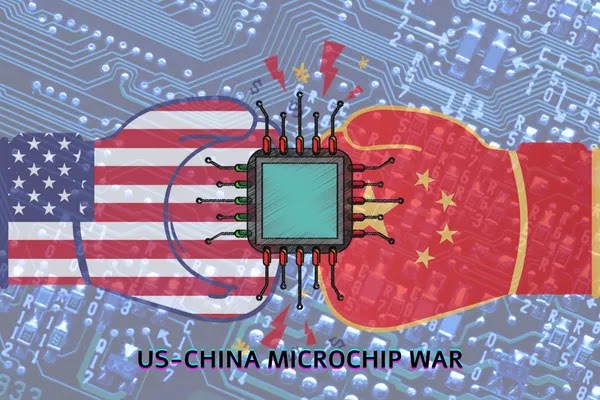 According to Reuters, the American government is thinking of limiting the export of U.S. Microchip goods to China. The microchip is a crucial piece of technology. Yangtze Memory Technologies Co Ltd. is one of the businesses producing chips in China using ingredients from the United States (YMTC). The United States government is considering limiting the export of chip-making equipment to impede China's advancement in the semiconductor industry and protect American businesses.

Suppose the American government authorizes the chip export freeze. In that case, it will also prohibit the supply of American-made chips to Chinese factories that produce more sophisticated NAND chips.

According to export control specialists, it would be a more comprehensive reflection of U.S. national security and the first step through U.S. export rules to target Chinese chip manufacturers outside of big military-grade semiconductors.

There are also rumors that the U.S. government is attempting to defend American chip manufacturers Micron Technology and Western Digital Corp. About 25% of the market for NAND chips is made up of those two businesses.

According to American officials, the restriction would apply to Chinese exports of raw ingredients used to create NAND chips, which have 128 layers. LAM Research Corp. and Applied Materials Company, both situated in Silicon Valley, serve as the primary suppliers for the production of NAND chips.

On anonymity, U.S. sources told Reuters that no new laws have yet been created because the federal government of the United States is still debating a ban.

A spokesperson for the Commerce Department, which is in charge of export controls, responded to Reuters' inquiry about the limitations' potential status by saying that it had not yet been discussed. However, the Biden administration has stated that it is primarily concerned with impeding China's attempts to create more sophisticated semiconductors to address alleged national security dangers to the United States.

Since its founding in 2016, YMTC has become an expert in producing NAND chips. The White House said in a study issued in June 2021 that YMTC was overcharging American businesses Micron and Western Digital. According to the study, Micron and Western Digital are directly threatened by YMTC's expansion and price gouging. According to the White House study, YMTC earned US$24 billion in subsidies from the Chinese government and was compared to China's national champion.

According to Bloomberg News, YMTC is currently being investigated by the Commerce Department to see whether it sold chips to the leading American smartphone manufacturer Apple Inc. in violation of U.S. export rules by selling them to the Chinese telecoms company Huawei.

When Reuters questioned American policy, LAM Research Corp., SK Hynix, and Micron said they had no comment. According to Reuters, Western Digital Corp., YMTC, and Samsung Applied Materials Inc. did not immediately respond to requests for comment.

Before Biden, tensions over the technology sector between the United States and China grew under President Donald Trump. Tensions have persisted up until this point. According to Reuters, the Biden administration is considering sending parts used to produce sophisticated semiconductors to China to compete with SMIC, the biggest chip manufacturer in China.

This week, Congress approved legislation that will let the United States invest billions in local chip manufacturing to give China a fighting chance.

The rule forbids semiconductor businesses that receive funding from the U.S. government from extending their operations or creating factories in other nations, including China, to produce specific advanced chips. High-end memory chip production will also be restricted to the location chosen by the American government.

According to Walkon of the consulting company Yole Intelligence, YMTC accounts for around 5% of the world's NAND chip output. He claimed Western Digital holds 13% of the market, while Micron holds 11%. According to Walkon, if President Joe Biden's government imposed limitations on chip exports, the YMTC would suffer greatly.

"There's no knowing how they (YMTC) will move forward if they're locked in manufacturing 128-layer NAND chips," Waltham told Reuters.

China's share of the world's NAND chip output increased from 14% in 2019 to over 23% in 2022. Data provided by consulting company Yole Intelligence show that NAND chip output in the U.S. decreased from 2.3 percent to 1.6 percent during the same period. Production of chips by American businesses is largely outsourced.

The potential restrictions from the American government may or may not impact Chinese semiconductor manufacturers. According to a press statement from Intel, a chip facility in China that the American corporation had previously sold to the South Korean business S.K. Hynix and was now maintaining under contract had begun creating memory chips with 144 layers.