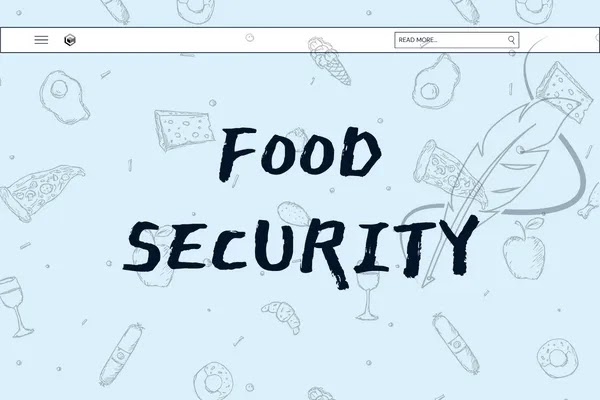 The critical area of human security is food security.

Food production equates to food security. The ability to buy or obtain such food on a per-person or per-household basis, as well as the distribution and storage of it, are all factors that go into this measure of "availability."

"Food Security" is important from a health standpoint. It must not be confused with "Food Safety," as it is understood from a medical perspective.

The UN Committee on World Food Security's definition states that "food security provides for an active and healthy existence of all people at all times." adaptable to their dietary requirements and preferred foods. Good, Safe, Nutritious meals and Economic access (Physical, Social, and Economic Access) are obtained through the social organization.

(Food security is defined as everyone having constant physical, social, and economic access to enough, safe, and nourishing food that satisfies their dietary needs and food choices to lead an active and healthy life.)

Standard Set by the Food and Agriculture Organization as the foundational elements of food security.

They are four standardized pillars.

"Utilization" is the ability to prepare food for daily consumption and possessing smoking equipment. It also refers to the long-term storage capacity of heat and cold by individuals and households, as well as energy fuel efficiency.

"Stability" refers to general socioeconomic conditions at the national level, ranging from community to individual and family levels. It is worried about income security and employment.

According to the 1974 World Food Conference (1974 World Food Conference), food security is the capacity to sustain an expansion of food consumption that is consistent and stable, notwithstanding changes in production and commodity prices. The appropriateness of nutrient-rich, essential foods Food security was described as the availability of the world's food production sources (supplies) at all times in various balanced, moderately regulated conditions.

Food security is defined as the availability of sufficient, nourishing, diverse, balanced, and good global food supplies of fundamental foodstuffs to sustain a steadily increasing level of food consumption and counteract changes in production and price.

The above interpretation is the criterion that has been interpreted based chiefly on food security's production and supply power.

Food security, as determined by the First World Food Summit in 1996, is the capacity of individuals to meet their daily dietary requirements and preferences for an active, happy, and healthy life. All people have access to reliable, complete, safe, and nutrient-rich food. They established economic and physical viability.

(Food security is defined as the condition in which all people, at all times, have physical and financial access to enough food that is safe, nutritious, and meets their needs in terms of diet and food preferences for an active and healthy life.)

Regardless of income or property status, all people—across all social classes and age ranges—have no preference between the rich and the poor.

The oldest urban civilizations in human history, Sumeria and Babylonia, experienced environmental degradation due to human activity. Along with the collapse of agriculture and food production because of soil degradation and local climate change, empires witnessed the fall of nations and dynasties.

Historical evidence reveals that central governments were directly in charge of distributing food that had been stockpiled during times of famine in the ancient Egyptian and Chinese empires.

A Weapon of Slavery & Bloodsucking Manipulation

Food instability has been utilized for millennia as a tool of class exploitation and Slavery throughout history.

In the 20th century's civil conflicts, food was also a weapon.

Rebels have prevented food from getting to areas under the central government's authority in various civil wars, notably the civil wars in Ethiopia and Sudan.

In the 20th century in Asia, US government agencies trained local and national militaries to utilize general cuts, including food shortages, as "counterinsurgency" techniques to fight communist and other leftist guerrilla movements during civil wars in Africa and Latin America.

Safety has been a critical component of strategic warfare because it is essential to the health, fitness, and food security industries.

Business and political rivals, societal rivalry Interstate and Interracial Soft Wars, which are cultural rivalries, are not secure. They frequently distribute and market hazardous goods for human consumption and raw ingredients for food manufacturing.

The European Union is one of many nations that have outright prohibited genetically modified food and risky synthetic biological raw materials.

The systematic use of undercover operatives to manipulate local and national government plans and policies and exploit the market by food producers and dealers in a target country is another strategy of tactical warfare. Encouragement is given in a variety of ways through incentives.

Food wars continue to be quite effective in one of the less obvious tactical wars.